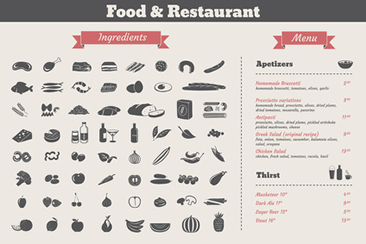 As an avid food lover I eat a very wide variety of food and don’t have to worry about being allergic to any of it unlike some of my peers. Many times I have been out and about with friends grabbing a quick bite to eat which shouldn’t be something to worry about, then you realise there is minimum to no information on anything in the food that could cause people to have an allergic reaction and it has to be put back on the shelf.

Majority of the time the staff do not know what is in the food that could be an allergy for someone as well as the poor labelling which causes problems for the 2 million peoplein the UK with food allergies, which brings to light the new food allergen rules for consumers by the Food Standards Agency so everyone can buy food with confidence.

The new rules.
The rules came into effect on the 13th December 2014 and will include takeaways and restaurants that are required by law to tell customers if any of the main 14 food allergen ingredients are in the food they serve.

These 14 allergens can range widely and include ingredients such as milk and peanuts, also even less known allergens such as mustard and lupin seeds.

With these new laws it is hopeful that less people will have reactions by accidently eating food they are allergic to which is a growing issue in the UK. Hospital admissions which relate to allergies has risen a massive 87% between 2002 and 2014. On average 10 people a year die caused by allergic reactions and a further 5,000 are hospitalised which is mainly caused by incorrect or no information being given about allergenic ingredients.

How will this new information be provided to you?
Food businesses have been given flexibility on how they wish to provide the allergen information, it can be verbally communicated by staff, signposted or onmenus/leaflets.

The new regulations will also change how allergy information is shown on pre-packaged food bought in supermarkets and shops.