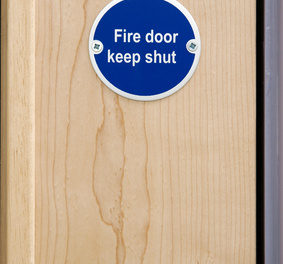 29th September to 2nd October was National Fire Door Safety Week, and during the week shocking statistics were revealed.

We all know why fire doors exist, the name says it all. They are doors with very specific purposes: to contain fire for as long as possible to give the best possible chance of the least damage and destruction. However, with the summer weather the UK has been enjoying, it seems it has been too tempting for businesses to prop open fire doors to take advantage of this.

Research by Ironmongery Direct surveyed 860 trade professionals and revealed commercial units to be the worst offenders. 72% of small to medium enterprises were likely to prop open fire doors, with 64% of large businesses breaking the law too. Public buildings should really know better, but 42% were found to have committed the offence, and older buildings were much more likely to prop open the doors (56%) than new buildings (15%).

Worryingly, 74% of tradespeople have witnessed a fire door being partially or totally obstructed, 58% of which were in public or commercial buildings.

However, it isn’t just propping open the fire doors which causes problems: maintenance is essential.

In the fire doors inspected, 47% had unacceptable levels of wear and tear and 30 % had loose or faulty latches as a separate issue. 49% were not subject to correct signage and 63% did not close properly, rendering them useless.

The most common fault, however, was the lack of intumescent seals at 73%. These seals are the main function of a fire door, expanding in response to heat and sealing the door into the frame. No gaps are left for smoke, heat or fire to travel through. This provides vital extra time for people to escape or be rescued and for the emergency services to tackle the fire.

With fire one of the biggest threats to buildings in the UK, Fire Door Safety Week has identified 5 key checks that should be conducted on fire doors regularly: